Inferna is a collection of 9 original artworks by Jade Mars. An attempt at aligning the Artist's
vision of Dante Alighieri’s Inferno with the trials and anxieties of the zeitgeist, an exploration of
the individual's modern-day personal hells.

The Divine Comedy: Inferno is one of a three part series of poetry written in 1320. It tells the
story of a poet's journey through the 9 circles of hell, with each circle becoming more and more
dark and sinister.
​
Inferno is considered one of the greatest pieces of world literature, it is a story of fury, pain and an underlying beauty.
Jade Mars hopes to take the viewer on a journey with a character (a young knight) through their own circles of hell, witnessing their own demons in the sins of humankind: the self-indulgence, malice and violence; in order to break free from them and ascend to Paradiso or Heaven.

Mars aims to retell each of the levels of Inferno through her artwork in a personal and surreal depiction. A feminine-identifying vision of hell with elements of Medieval dark fantasy and creepy cute pastel goth; the goal is to create a vision of malevolence, horror and violence

Inferna opens on the 6th of November at Fokus Creatives 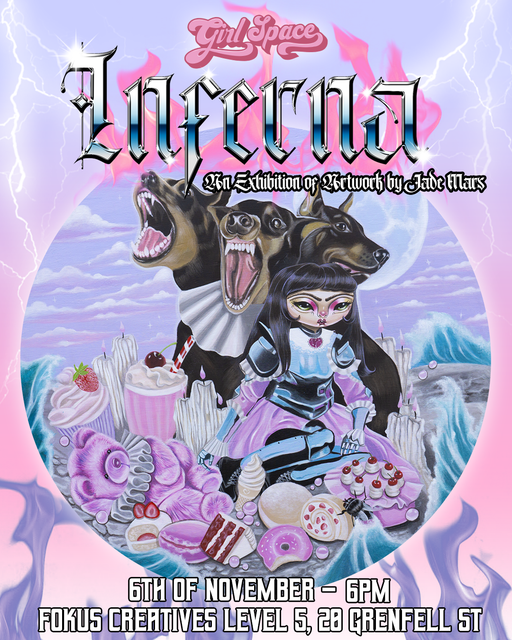 wrapped up with a velvet bow of sickly-sweet, baroque-inspired cuteness and opulence.

0 Items in your cart
Keep shopping